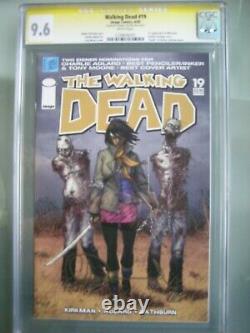 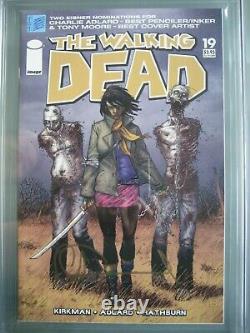 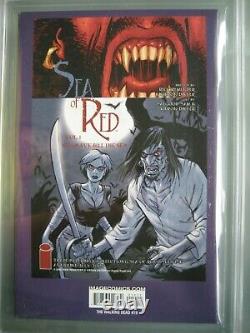 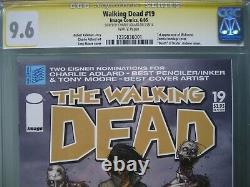 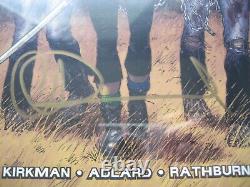 The issue begins with a new character, Michonne, walking through a field full of roamers, dragging behind her two shackled, armless, jawless zombies, Mike and Terry. She is alerted by Otis riding down the road in a carriage, yelling and shooting zombies on his way to the prison. A roamer notices her and starts closing in but Michonne cuts its head off with a katana. The other roamers don't seem to notice her as she proceeds to follow the carriage. Meanwhile, at the prison, Dexter's holding Rick at gunpoint.

Patricia protests, but Dexter ignores her. Rick tells Lori to take the kids inside but Dexter forbids her from doing so. He wants everyone in Rick's group to leave the prison. Axel tries to diffuse the situation, but this only prompts Dexter to banish him as well. After repeatedly asking Dexter where he got the guns, Rick finally gets an answer.

Dexter says he got them from the armory in A-block, purposefully keeping it off the tour so Rick didn't know about it. Rick says he thought as much, confusing Dexter as zombies begin pouring out of the A-Block.

Rick orders Lori, Allen and Carol to go inside, while everyone else prepares for the shootout, with Tyreese tossing Rick a gun. Dexter protests, but Rick asks him if he'd rater shoot them or the roamers trying to kill him, causing him to relent. Hershel, Billy, Andrea, Glenn and Dale arrive to assist, while Allen decides to stay to help. Otis arrives to the sound of gunfire, wondering what's going on. He begins to kill the walkers gathered at the fence with a shovel, yelling to be let in, when he witnesses the survivors embroiled in a shootout.

Otis realizes too late that he's being surrounded. He tries to fight the roamers off, but there are too many. Just as he's about to be devoured, he is rescued by Michonne. The walkers are closing in as the survivors attempt to fight them off. A roamer almost bites Dexter, but Rick saves him. Dexter coldly states this doesn't change the situation, and that a smart man would have let the walker get him. As the last of the roamers are being eliminated, Dexter is shot in the head by Rick discreetly. Tyreese notices but doesn't say anything. Andrew despairs, and Rick claims Dexter must have caught a stray bullet. He advises Andrew to surrender and Andrew takes his advice. Michonne gives a grateful Otis his shovel back. She asks if Otis can get her inside the prison, with Otis confirming he knows the people inside. He notices the chained walkers Michonne is dragging behind her, and Michonne explains they're her boyfriend and his best friend, and that she uses them to camouflage herself from other walkers. Together, they head towards the prison. Otis meets Rick at the gates, and tells him how Michonne saved him. Otis asks if Patricia is okay, and Rick replies that she's fine, promising to fill him in on the rest later. Rick then talks to Michonne, and tells her she can stay at the prison if she surrenders her weapons and is willing to be locked in a cell during the night, but forbids her from bringing her pet walkers inside. With that, Michonne immediately decapitates Mike and Terry, claiming she doesn't need them anymore.

Rick says that she can help with the burning when they are interrupted by Andrew, who runs outside unarmed. Dale asks if they should go after him, but Rick says Andrew is on his own.

Rick asks Michonne if she still wants in, and Michonne is certain that she does. At night, Tyreese meets up with Rick, who is standing by himself on a walkway.

He talks about Rick killing Dexter and, while he agrees, he points out that Rick went against his own law of you kill, you die. Rick simply acknowledges this fact, possibly thinking about a new rule. The item "Walking Dead #19 CGC 9.6 SS Signed Charlie Adlard 1st app Michonne" is in sale since Thursday, July 9, 2020. This item is in the category "Collectibles\Comics\Modern Age (1992-Now)\Horror & Sci-Fi". The seller is "madeofmiracles925" and is located in Dublin, California.