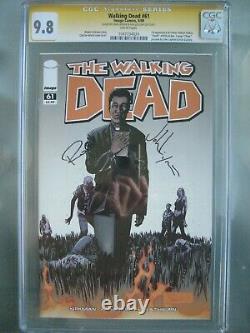 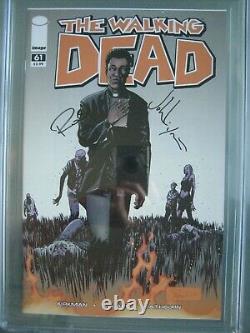 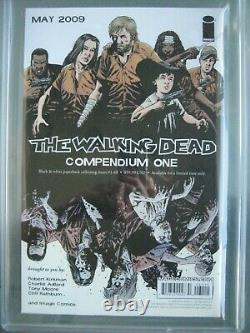 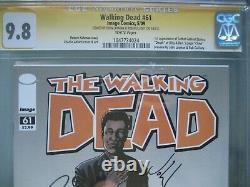 Chew preview by John Layman & Rob Guillory. Robert Kirkman (Story) Charlie Adlard (Art & Cover). On the road, Andrea discovers a van, which still has the keys in it.

When she opens the doors of van, she finds mattresses. Rick thinks it could work, and Andrea is interested in them. She says it's like Christmas had come early this year. Carl asks if they skipped last year's Christmas. Dale and Abraham get the van running and they contend with who's going to sleep in the van.

At night, Rick is on watch duty. He picks up the receiver slowly, and hears Lori's voice.

Lori "says" that they should talk about Carl. In the morning, everyone is packing up the truck. Andrea wonders where Ben and Billy and are, but, Dale says they are in the woods, urinating. Andrea goes after them, only to find that Ben had murdered Billy with a knife. Ben says he didn't hurt his brain, and attempts to hug a shocked Andrea.

Dale shows up and begins to cry, when he realizes what had happened. Rick runs into the forest to find them, and is also shocked by the gruesome sight. He tells Carl, who had followed him, to go back to camp and tell them that they're not driving anywhere today and they should set the camp up again. Carl starts to run back to camp. After Billy's grave had been erected, the group is discussing about what they're going to do with Ben.

When Andrea says that he didn't even know what he did, she put him in the back of the van. However, Abraham thinks that makes him more dangerous. Dale says he's just a boy, and Michonne emphasizes that he is a boy who doesn't understand murder. Abraham asks if this would have happened in the time when there were not zombies, he would have been placed in therapy for at least twenty years, and he maybe wouldn't be cured.

Rick asks what Abraham is suggesting, and he says "what needs to be done". Andrea starts to scream that they want to kill a little boy.

Abraham becomes silent and Maggie takes Sophia with her to somewhere else. Glenn wants to come accompany them, but, Maggie commands him to talk some sense into everyone. Dale asks if Abraham is serious, and he is. Andrea isn't going to listen to another word of the conversation and leaves. Dale goes after her and tells everyone that they should be ashamed of themselves.

Glenn asks if they really considering killing a child, and Rick agrees. He says that Ben's age doesn't really matter, and they don't know when he's going to snap again. Morgan asks if there are any in the group who would be able to do the deed. Suddenly, a priest shows up and asks if they could spare a moment to talk about the Lord.

Michonne asks if the man is real, and Abraham orders him to put his hands in the air and introduce himself. The preacher, identified as Father Gabriel Stokes, states he's a traveler who has ran out of food, and has no sort of weapons. Abraham searches him, and they believe him.

Gabriel informs them he'd been hiding out in his church for a long time, and a couple days ago, he ran out of food. He says they could travel to his church, and Rick says they might do that later and directs him toward their food supplies.

At night, Dale is talking to Andrea about "roamers", which they haven't seen all day. Andrea suddenly changes the topic to Ben, about what they're going to do with him. Dale says he's going to keep watch on the van.

He isn't going to let anyone kill him, and Andrea asks if they should sleep in the van. Dale doesn't think they should. Meanwhile, Carl sneaks out of his tent. He runs to the van, opens it, and sees Ben.

He asks if Carl is scared of him, and Carl disagrees. Suddenly, Rick wakes up to a gunshot. Rick orders Carl to stay in his tent, unaware that Carl stuffed pillows under the blanket and topped it off with Rick's sherrif's hat, giving the appearence that Carl was still laying there.

Everyone assembles in front of the van, only to find Ben's body. Dale yells that he wants to see this coward who killed his son. Dale collapses and Andrea comforts him.

Dale is still angry about loss of his son. Morgan sees Carl running to his tent. Glenn says he didn't see anybody fleeing anywhere. Rick reveals that they may never know who killed Ben. After erecting another cross, this time next to Billy's grave, the group decides to leave.

Dale suspects Carl of the murder, and Rick promises that he was sleeping right next to him. Morgan gives a mysterious look to Carl.

Gabriel suggests that he should say a few words to Dale before they leave. Rick says he should let him go, and asks if he even knows whats going on.

Gabriel does and he gives a speech, preaching that the boys have left to the Kingdom of Heaven, and Rick tells him to keep his theories to himself. Abraham asks Eugene if his radiophone works, but, it doesn't. Abraham believes that they should depart now. When they leave, two living survivors in the woods are talking about what they should do with the group. One informs the other that they're going to follow them. The item "Walking Dead #61 CGC 9.8 SS Signed Adlard & Guillory 1st Father Gabriel" is in sale since Wednesday, October 9, 2019. This item is in the category "Collectibles\Comic Books & Memorabilia\Comics\Comics & Graphic Novels". The seller is "madeofmiracles925" and is located in Dublin, California. This item can be shipped worldwide.