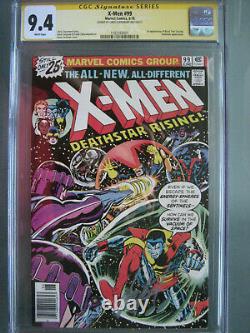 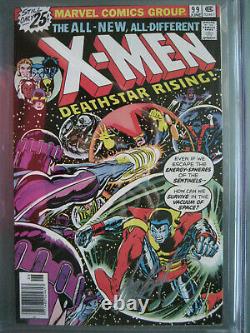 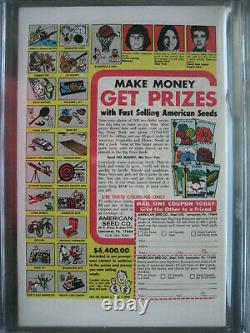 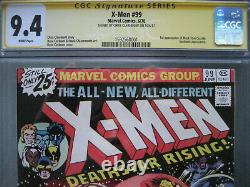 June 1976 Marvel Comic s. Chris Claremont (Story) Dave Cockrum (Cover & Art) Frank Chiaramonte (Art). Having attempted an escape only to find themselves in space, Banshee, Wolverine, and Jean Grey are rescued by Sentinels under orders to keep them alive. They are contained in environmental bubbles and brought back aboard the Project: Armageddon space station where Stephen Lang tells them that escape is impossible.

On Earth, Cyclops uses Cerebro to try and track the missing X-Men, finding no trace of them on Earth, confirming Peter Corbeau's theory that the Sentinels that captured them had ventured into space. On an evening of increased anti-mutant hysteria, which included riots and the fire-bombing of a pro-mutant judge, Peter Corbeau uses his connections with NASA to launch a Starcore shuttle into space, under the pretense of examining the coming solar storm, but in reality it is a cover so the X-Men can go on a rescue mission of their comrades in space.

Cyclops is also worried about Jean's safety after the two of them are finally becoming romantically involved after so many years of repressing their feelings. As the space shuttle piloted by Peter Corbeau blasts off into space, a solar flare is detected at the Sun monitoring satellite known as Starcore One, with a direct course for Earth. Meanwhile, on Earth in the village of Dal'Room, Ireland, a solicitor named Flaherty rushes to the post office with an important letter for Sean Cassidy that needs to be rushed out to the United States right away.

As he goes back out into the storm, he is confronted by a man who is Sean's cousin. When this man learns that he is too late to stop the warning to be mailed out to Sean, his cousin blasts him with an energy bolt from his cane, killing Flaherty.

While in Earth orbit, the space shuttle approaches the space station that is operated by Project: Armageddon. Detecting the X-Men's approach, Stephen Lang sends out his Sentinels to destroy the shuttle.

With Colossus at risk of suffocating, they ram the shuttle through the hull of the satellite so that they can board the station. Storm meanwhile is alone against a group of Sentinels and finds that she can control solar winds and cosmic energy in space, and uses these powers to defend herself against her robotic attackers.

While inside the spaceship, Colossus, Nightcrawler and Cyclops manage to hold their own against the Sentinels that have come to stop them. Colossus is particularly savage in battle, believing that Storm was killed.

However, when they finish destroying the Sentinels, Storm arrives alive and well, much to the Russian mutants joy. Cyclops is contacted via telepathically by Jean who tells him that Wolverine and Banshee are being held in the cell block while she and the Professor are being held in the main mission.

Wanting to save Jean on his own, Cyclops orders the other X-Men to go and rescue Banshee and Wolverine. Blasting his way to the main mission of the satellite, Cyclops easily overpowers Stephen Lang and is about to beat him to death until Jean stops him.

Before Cyclops can act any further, someone strikes him from behind. As Lang drags Cyclops away, Jean turns around and is shocked by who she sees. Moments later, the other X-Men arrive in the main mission they are confronted by what appears to be the original X-Men: Cyclops, Marvel Girl, Angel, Beast, and Iceman all led by Professor X who demands the original X-Men to kill the new team.

This story is continued next issue... The item "X-Men #99 CGC 9.4 SS Signed Chris Claremont 1st Black Tom Cassidy" is in sale since Tuesday, February 11, 2020. This item is in the category "Collectibles\Comic Books & Memorabilia\Comics\Comics & Graphic Novels". The seller is "madeofmiracles925" and is located in Dublin, California. This item can be shipped worldwide.